You know, when there are only the two of you in an elevator and someone lets it rip, you know its him because, he will have that innocent "Who, me?" on his face when you look accusingly at your friend. Its no point asking your friend to confess because:

With that look on his face and those Bambi eyes, yeah, those Bambi eyes, he will be defending his "innocence" throughout the whole elevator trip. You know its him, he knows its him but the accusation it won't stick. In the end, both of you will have to deal with the bio-gas instead.

So, that was the same with Kristine. Just after her meal, she decided to give me her first present or should I say, her first biological present: A poo-poo in the hand. And she gave me that same "Who, me?" look after that. But suffice to say, I am quite happy, except for the fact that Kristine would do this after each feeding. And sometimes, after a nappy change too, which we have to start all over again. 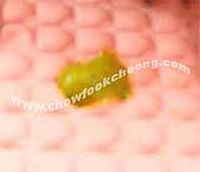