OK, while I am waiting for the approval of the new programmer, another thought came to my mind: How to trigger the rifle.

Looking at the pictures of the original prop, the trigger is actually a square push-button electronic switch (but none in the drawings). Ignoring the fact that the rifle for the Insurrection movie has a trigger (in the drawings). So, in the movie, the actors are using rifles which has no triggers (except for Hero versions?) as the Special Effects guys would put the phaser flash into the movie. But for this project, the need for a trigger is necessary. And the decision to overcome this would mean that the rifle would not be true to the original prop anymore.

The need for the trigger was to solve two main problems.


This is because of the problem with the inconsistency of the rifle's rear scope which changes between WHITE and RED on different occasions. Therefore, the agreed solution is to leave the LEDs WHITE by default and when the user is about to fire or pullls the trigger slighly, the LEDs would change to RED. In order to achieve this, a secondary trigger was designed into the circuit. If a mechanical switch was used, the solution would mean extensive modifications to the rifle's grip. And since the rifle is cast as hollow resin, this modification could make the grip become fragile. Therefore, the only solution I could come up with, was to use optical switches. The advantages of these switches are twofold, namely:

1) There are no mechanical/moving parts which would make the rifle last longer even if the owner is trigger-happy.

2) The modifications to the rifle's grip is minimal (I hope) with only the need to cut a small slot for the trigger to move about.

Although this solution is best, it beget another problem: The trigger has to be custom made. Looking at the diagram below, the rear of the custom-made trigger must have a small rectangular block with the maximum thickness of 4mm for the optical switches. This rectangular block would interrupt the light flow in the optical switch which would generate the much needed signal to the microprocessor (as seen in the previous "The Phaser Rifle X" entry). And another thing, there is also the matter of a spring to help the trigger to return to its original position once it is pulled. I do not know who to approach to make this trigger since I would like it to be made out of aluminum.
Ha ha ha ha ha 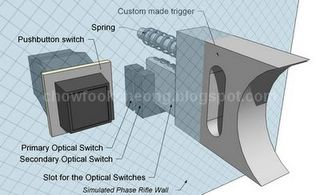