As so, today is Kaelynn's first try in the swimming pool. Actually, its a baby pool. And with the new swimming costume we got for her last Friday, she was very excited. My Dad walked her around the pool to help her familiarise the place and then I took over from there. I led her by the hand to the steps. The slowly, into the pool. I was hesitant to just throw her into the pool like those 'tough' childhood stories because I would know that she would have a phobia.

You can see she is very excited because her her mouth is opened wide and with her tongue almost sticking out. Yes, this is one of those 'beyond the wildest dreams' feeling for her. Slowly, I led her in more, and taught her how to submerge herself up to the neck. She is not ready for the 'underwater' session just yet. And so, I 'walked' her around the pool to break the wonderment.

'If you panic, just stand up'
It was not until I started to splash water on her that she started to have fun. And later on, with Kristine's lesson over, she came by and played with Kaelynn. But at the same time, I also made sure she practiced her lesson too. With her sister around, Kaelynn was not so scared anymore. I started to dunk Kristine into the water so that Kaelynn could see it was fun. And so, I tried it on her but ..... well, it needs more work. Luckily the baby pool is shallow and when she panics, she would either try to stand up or after a few seconds, I would pull her up if she failed. 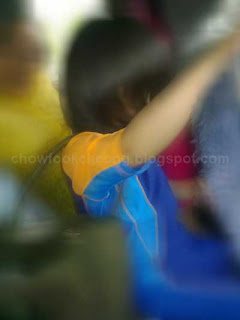 Kaelynn with her new costume 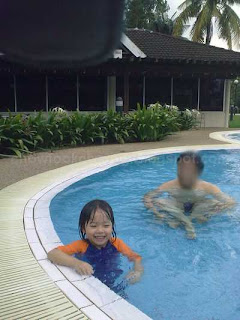 You can tell how much water was
displaced when I went into the
pool. Yeah, I am fat. Very fat now.
Date: Saturday, February 06, 2010 No comments: Links to this post

What I did today IV

OK, this should be the last of 'What I did today...' series. I am sure by now, you would have been bored already because if you're not, I am. Anyway, this is the last weekend before the Chinese New Year which means I would have to stop doing everything for a few weeks on this project mainly because I do not have the space here. In this room, it has almost perfect lighting and also the air-con. If I went back down to the spare room, I would have to clean it up all over again as there was a lot of stuff that mysteriously appeared.

So, practically, I spent the whole day, from 10:00 to 17:00 soldering. Yes, soldering. And also chatting with nexus on-line regarding tips on how to sell my PCB on line. I think I would just leave the selling to him and concentrate on the next part of the project, which is the Photon Torpedo. Its not called laziness but trust. As in I trust him to get it all done for me since I have no idea how to keep track of the sales by myself since I estimate this would be sold by next year. So, its a bit silly to wait for all the boards to be sold and continue with the next project. By then, someone else would have reverse engineered my design and make their own anyway. Yeah, this is going to be a limited product. Because once its sold, its gone.

Why am I making such decisions? Because when I got the boards back, it was more than I asked for and so, I had a lot. And I mean, A LOT. By the end of this afternoon, my eyes were tired and so were my hands from all the soldering as each board has a minimum of 80 soldering points, not counting the cabling and all. Multiply with the huge amount of boards I had, its a nightmare. I think for the next design, I am going to ask the shop to do it all for me. Of course, I have to compare the price first. 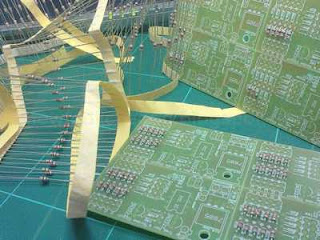 These components are fresh from the reels and are
hand soldered by me. How's that for the personal
touch? Ha ha ha ha. 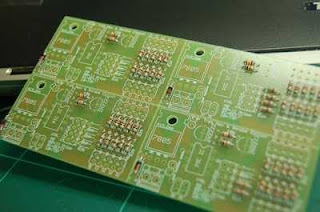 Sadly, not all boards are complete because I only had a
limited budget and so, most of the boards are waiting
for the remaining 550 resistors before they can go on
to the next stage. If you look at the board carefully, it
is divided into four. Once I have soldered most of the
components, I can snap them in half by hand as the
PCB manufacturer has already scribed the break points. 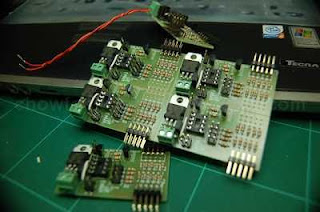 So far, I have completed six boards. But once the
resistors have been bought, I should be able to
increase the first batch count more. Once I snap
the boards, I can then complete solder the rest
of the pin header connectors. In the mean time, I
would need to design a test jig to test all these
boards as well.
Date: Saturday, February 06, 2010 No comments: Links to this post