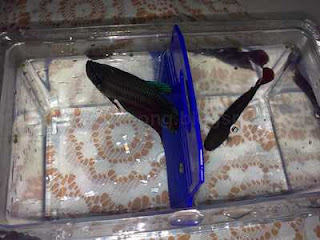 So, this is one of the signs that there is something
wrong with the fish. It has been going to the top
and also floats at an angle. 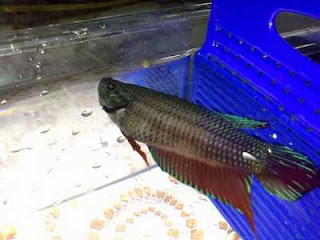 At first I thought it was dead but when I prodded
it with my finger, it swam back down as if nothing
has happened.
Date: Sunday, February 07, 2010 No comments: 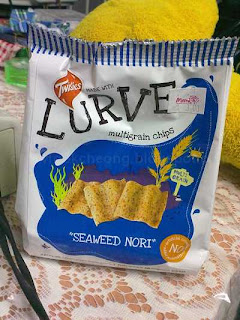 Kristine: Mom, I'm full
Mommy: But you haven't finished your dinner...
Kristine: I'm full. Can I have this now? (The Seaweed Nori)

I intercepted as I know where this is heading, almost every dinner. They wanted to eat those stuff other than their dinner, which is bad. And in the end, someone would have to cook them Maggie Instant Noodles which is something I am not happy, nutrition-wise. 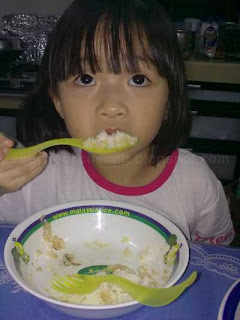 The mistake with double-sided tapes

And so, we now know that its not fun to get Krsitine some double-sided tapes. Apart from gumming all the books, she used it was table decorations too. Its easy to apply but horrible to remove because these tapes are practically all gum. I also made the mistake of using lighter fluid to remove them. Because they're all gum, the fluid literally melted and spead the gum all over the place which I rubber. In the end, I had to scrape the table with my metal ruler and gumming it up and my fingers in the process. 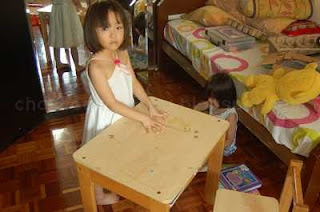 You cannot remove them by fingers as they are
stuck fast and in the end, you would have blisters.
Maybe one day I should try it with a freezing spray 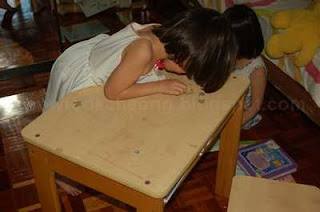 After scraping so much, I had to come in and help

While I was there, I happen to see the second edition of Polar Lights 1/350 Enterprise. I asked Iris if its already taken and she said no, despite a lot of people asking about it. For you see, this is a very big model kit and when finished, could be about 1 meter long. For Star Trek fans, this is the long awaited dream kit and yes, its very daunting. At the side of the box is a paper attached 'telling' the potential owner to contact SFTPMS (Selangor Federal Territory Plastic Modelling Society) should they encounter any problems or needs to have the model built.

This was, accoding to Iris, a lot of people expressed interest in owning it but did not know how to build it nor even make it into display quality. It has been sitting there for quite some time and it was an extra unit too. So, after some discussion, she let me have it, and with a very attractive discount too. Yeah, so I took it. Heh.

Enterprising History
Previously, a company called AMT/ERTL came out with the kit since the 80's but its not accurate, which helped spawn the accurisation industry for Sci-Fi. But the problem is, by the time you got those accurate parts, it would have cost more or the same as the kit itself and yes, at 18 inches, its not enough.

The after the millenium, Bandai tried their hand with their own version using their latest plastic injection technology which made Gundam kits so technically superior and precise. But alas, compared to the AMT/ERTL, it was small. Beautiful, accurate, all lighted up too but small.

De Boer then got everyone salivating with their 1 metre resin and fibreglass version but it was too expensive and is a shipping nightmare for everyone. Plus, you would need to be a competent modeller to do it right.

And so, during the last few years, Polar Lights came out with the 1/350 scale. And yes, its huge at one metre. But what its worth noting is that apart from the Tamiya 1/350 CVN-65 Enterprise Aircraft carrier, this is the biggest Sci-Fi model kit ever. And its quite accurate in most parts too. But what is so special is that it was designed to be lit up. Yes, lit up. So, this is what I am doing now, with the PCB board project.

The First version
Polar Lights issued two versions of the model. Basically, they are the same. The only difference was that one comes with white plastic while the other in light blue. The white plastic version was the most sought after for those who plan to light it up using 'The Raytheon Effect'. This is because the main saucer is curved and it is not easy to simulate the spotlight fanning effects as seen from the Movie. (Later on, it was revealed the Movie model was lighted up externally which, is difficult (but not impossible) to achieve using model lights.) So, what Raytheon did was to light the saucer from inside and with the proper light masking, the result was amazing.

The Second version
For the second version, although the model came in white plastic, there is a blue tint which shows up considerably when light via 'The Raytheon Effect'. However, this version, which is the one I have now, comes with extra aztec decals. This is because the model is not exactly white but is comprised of an almost aztec-like patterns. The painting is a nightmare too because its full of different shades of pearl-like colours, gold and mish-mash of other colours. And so, to minimise any blue-screen reflections, the model was toned down to what you saw in the final cut.

My Project
Although the kits allows you to build the two versions, I prefer the Refit as in NCC-1701A, seen the Star Trek movies IV to VI, mainly because I like the Warp Nacelles to be lit up blue and so is the blue impulse dome. So, for the electronics, I am doing the Navigation/Strobe, Photo Torpedoes, Deflector Dish, Spotlights, Impulse and Warp effect and all controlled from a controller board, maybe, possibly, controlled from a wireless remote too. But they can work as stand-alone units too. 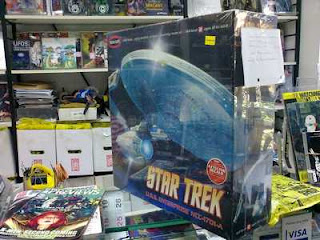 Thanks to my membership, the price I got from Iris was
cheaper than getting it from the States, but its still
slightly close to double for what I got years ago.
Date: Sunday, February 07, 2010 No comments:

Getting more tools from Pasar Road

OK, OK. I stupidly went to Pasar Road again this morning in the hopes that I could get some more resistors apart from my usual shop as they do not open on Sundays. I should have known they do not sell such special high quality specs. Still, all is not lost as I needed a few tools too: 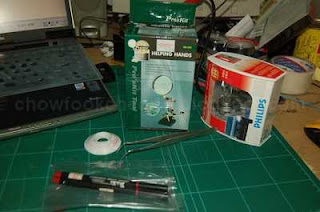 From left to right: Ceramic alignment tool ( fancy word
for non metal screwdriver which is very important when
you play with radio frequencies) RM2.00 each, a solder
wick to remove solder from the PCB board RM3.50, a
pair of non magnetic tweezers (for the microscopic SMD)
RM6.00, a Helping hand which I will convert to a PCB
soldering jig RM29.00 and lastly, the Philips Power2Night
H4 car headlamps RM115.00. Yeah, my last cheque came
through this morning. Not shown were a soldering iron
replacement tip for my 5 year old iron. Or was it 10?
The tweezers and desk magnifier came into good use when someone knocked over a cactus plant and someone else picked it up without protection..... Ha ha ha ha. No, it was not me but I had fun pulling the six cactus needles out from the middle finger. 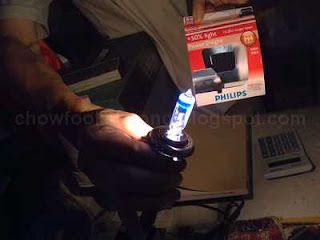 This is a very bright H4 and though I was tempted
to get the cooler (white) bulbs, its not recommended
since it would not allow me to see clearly during rain
and also, I do not want to donate to the Police Charity
Ball as well. 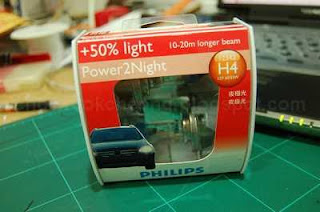 I love the packaging a lot. There are no cellophane
tapes or any other fastenings. Just the normal
click and snap locks, all held together by this
paper cardboard box. 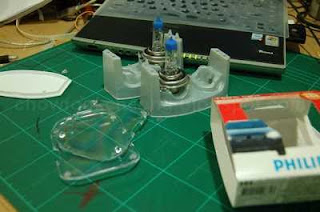 Once you pull the two white covers apart, and then
the two grey bulb holders, everything would come
apart but you have to be careful not to touch the H4
bulbs, even with your hand. Dray as it feels, fingers
have sweat and when the glass is hot, they would
compromise the whole bulb and crack the glass. 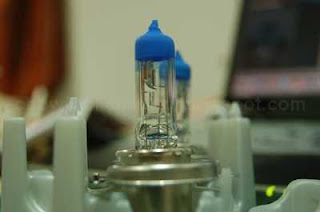 Can't wait to for them into my Bengmobile. But I
have to get some other things first.... soon.
Date: Sunday, February 07, 2010 No comments:

Email ThisBlogThis!Share to TwitterShare to FacebookShare to Pinterest
Labels: Bengmobile I, Electronics

The perils of parking outside

Well, sooner or later it had to happen anyway. But I was surprised. Surprised at how I approached the incident. If I was younger, I would be pissed the whole day and try to catch the culprit. But this morning, I just have to shrug it off and just hoped that it was a very expensive white car that did it.

I mean, with the school across, I am sure on Saturday, someone would have tried to do a U-turn and found out that they cannot complete it. But chances are, they would not have noticed since the damage is minor, and thus continued with the stunt. Anyway, I am planning to do up the rusting roof and bonnet and so, this might be a good time to get everything done up as well. 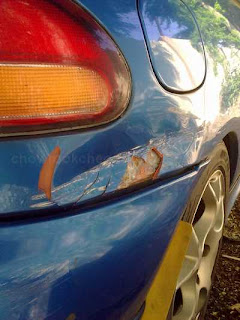 You can see the superb skills that went into repairing
and painting this car. Yeah, years ago, I backed into
a pillar in Mid-Valley in a hurry to park the car with
my colleagues in tow. Maybe I need to spray some
stuff to keep it from rusting so soon....
Date: Sunday, February 07, 2010 No comments: