Going to the Clown House twice

OK, since everyone was out of the house, I had to come back home early so that I could take my Wife and Kristine to her School Dinner. Wife was taking Kristine instead of Kaelynn as she had to choose between the two. And so, I had to take care of Kaelynn.

Although they had gone to MacDonalds for lunch, I decided to take her to MacDonalds again. This was because at about half-past eight, Amcorp Mall was winding down for the day and the Clown House, the only place which does not have spicy food, was still open.

Going back home after droipping them off nearby was not a good idea as I've been trying to wean them off Instant Noodles and Astro. 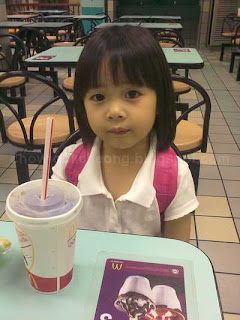 This looked so familiar to me as
Kaelynn was wearing Kristine's
shirt and her backpack was in
the same shade of pink too. 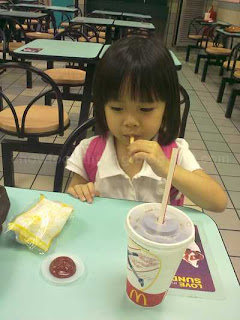 And so, she tucked into her
Happy Meal, starting with
the fries. 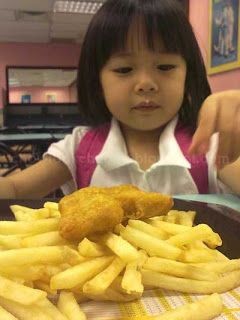 And then, once she is satisfied, she
went for more fries, leaving the
nuggets all alone. 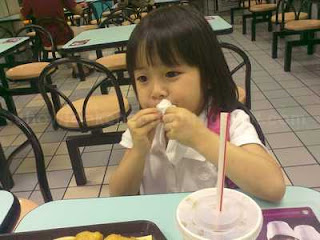 After two nuggets and more fries, Kaelynn
is more or less quite full. 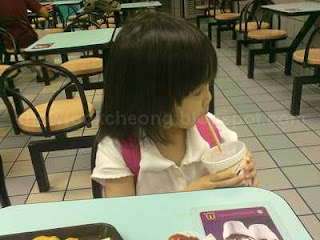 And so, she started on her Coke 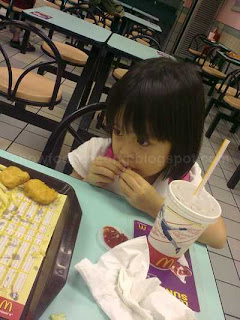 And then more fries 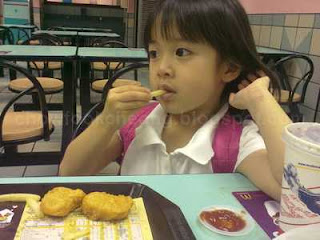 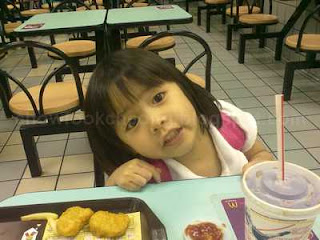 And more fries until the whole tray is empty
(OK, so I had some too) and she said,
"Daddy, I'm full."
So, being a parent, I am very sure you all know the meaning of DBKL. And yes, I had to do that. Thank Goodness she did not start on the ice-cream. And sometimes, I wonder how I got so fat all of a sudden when I was on the oats diet.
Date: Wednesday, November 18, 2009 No comments:

Everyone loves to spray

Today, it has been raining from the moment it started to the moment it did not stop. And so, yours truly was stuck. And there is a customer waiting for us since my Tech could not make it in time. The idea of me running 200 meters to the car in heavy rain is not a good one. Imagine the environmental impact to the office towers and its surrounding area caused by a 6.8 quake from a fat Engineer and doing a Marathon with all his equipment.

And so, my Boss came up with a better idea of having a nice cup of 30 minute coffee. I call it 30 minute coffee because it took that long to have the order go from the girl manning (?) the mop to the waiter to the drink maker and to the rest of the staff who did not seem the have a clue on how to make a nice cup of coffee and carry it 20 feet to a table without spilling a single drop.

While trying to resist the urge to die from dehydration, I diverted my attention to some yellow posters from a nearby shop, which sells pepper sprays. The poster claims that the pepper sprays are hot. Maybe its selling fast or its supposed to induce extreme temperature changes but its definitely hot.

And below the title, were the sales pitch which spews the benefits of having a pepper spray. But I wonder how it can protect you from Road Hogs. So, after thinking much about it, there were definitely some Pros and Cons on using the spray. Either that or my coffee ran out, leaving me to use my own imaginations:

1) Frontal assault
Action:Speed past the road hog and then trick them into winding down the window.
Result: If they're driving a Proton Waja, you're out of luck as that car model is famous for its broken windows. And Secondly, with all the Credit card charges, everyone knows how aggressive a Credit Card guy can be.

2) Car to car assault
Action: Match the speed of the car side by side and release the spray.
Result: Unlike Star Trek where you can transport a crew member ship to ship while travelling at Warp, the same cannot be said when both of you are traveling side by side. If you're alone in the car, the spray is definitely going to flow back into the car. And if your passenger is doing it, the spray will still definitely be flowing back into the car. Learn and practise taking off the gas mask quickly when you see Police with MP5 machine guns manning surprise checkpoints.

3) Direct path assault
Action:Speed past the Road Hog and then throw the spray can onto its path.
Result: This is definitely not going to work. For one, their car will not trip, roll-over and then burst into flames just like the ones in the cartoons. Two, you'll be arrested for littering. And three, the can might trip over some chicken crossing the road which then immediately becomes roadkill. And you'll be suspected of fowling up the road.

4) Rear car assault
Action: Match the speed of the Road Hog and then speed past to release the spray.
Result: This is not easy especially if the Road Hog in question has wised up to your antics. In the end, one of you will definitely run out of road. Learn to throw the spray away before you crash as the implications are very obvious. Besides, cars are immune to pepper spray. 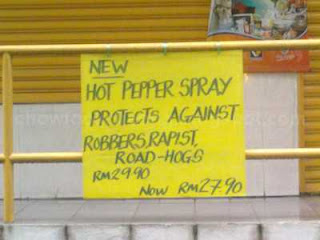 Yes, for Rm27.90, you can protect yourself
from Robbers, Rapists and most importantly,
Road Hogs. Yes, due to the Economic crisis,
it is now cheaper to be on the offensive. 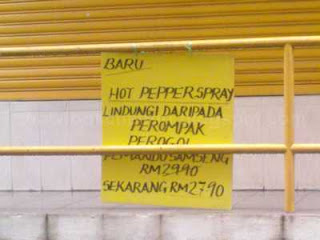