While I was searching for the Petrol Station video, I came a cross a lot of videos. That is the problem with YouTube. As soon as you see one, you want another one. Anyway, these are some of the pranks done in Japan...........

Cleaning the Lady up II

By now, its starting to rain. So, under the slight drizzle, I washed the car as fast as I can and the wax job would have to be done some other time. Not only that, I need to remove all those tar spots first and there are some marks which really needs to be taken out. Anyway, this is the best I can do now and with my hands tiring, this is where I really wished I had the orbital polisher. 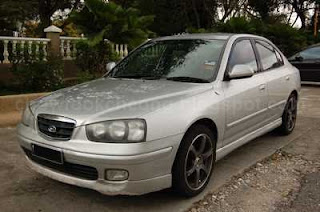 Well, she is all washed and clean now, the only thing
I cannot do, even in the shade, away from the rain, is
to apply the RainX on all its glass. Because I think I
left it in the office. 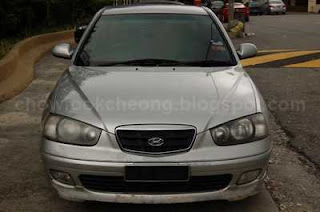 See the headlights again? The left is still very blur.
Maybe I did not sand it hard enough. I need to try
again soon
Date: Sunday, November 02, 2008 No comments:

Email ThisBlogThis!Share to TwitterShare to FacebookShare to Pinterest
Labels: Elantra

Cleaning the Lady up I

So, with most of the afternoon free, its the perfect time to perform some minor maintenance to the Elantra, sore pinky or no sore pinky (yeah, it still hurts like the dickens). My first task is to do up the front headlights, followed with a good car shampoo session and finally, a wax job. The trip to JayaJusco's Eneos costs me RM104.00. Still, personally, I think its worth it because the car has given me nothing but enjoyable driving everyday. Because of its chassis, taking corners at 80 is quite normal and you would not feel anything out of place. Last of all, is the speed. Eventhough your body feels like 60, the meter is saying 85. Whooo....... 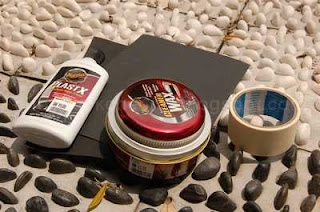 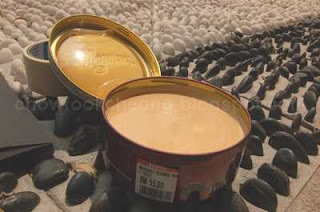 Opening the wax's container, the nice cover holds the spobge.
But what's really interesting is the smell of the yellowish/brown
wax. My Boss also agreed with me that is smelt like one of those
toffee/butterscotch/caramel sweets. Its close enough but we
can't pinpoint the smell. But if you smell a second too long, it
would be followed by the chemical's fume. 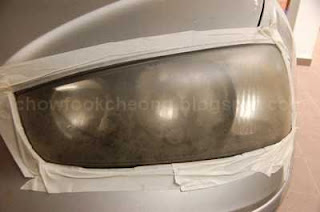 This is how the untouched headlamp looked like. I have just put
on the masking tape. It is rough and I think some parts have
peeled off. This is the problem with plastic headlights. The
other is when it turns yellow due to the UV from the Sun
or from the earlier lamp element which does not have UV
coating. I have to be fast because the sky is darkening.... 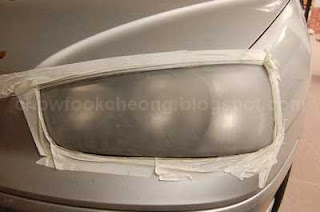 After going through it with grade 800 and then grade 1200
sandpaper. This is the hard part and already my pinky is
starting to get more and more painful. Maybe I should
invest in an orbital sander/polisher (someday) 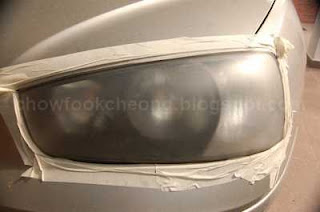 After going through with a wet cloth. I was so happy because
I can see the headlights clearing alrady. 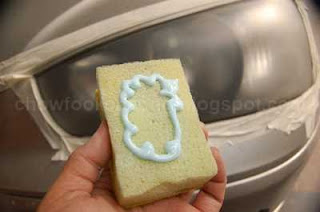 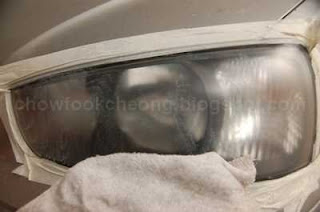 "...working a small section at a time. Wipe off residue with a clean
100% cotton cloth" (Rag taken from the garden) 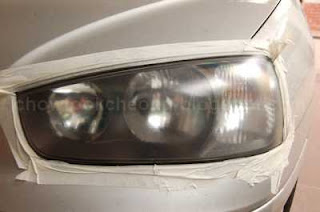 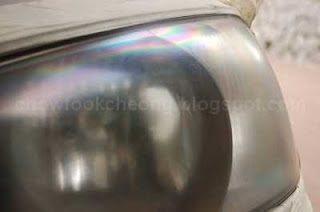 But if you look from another angle, you can see it start to
blur almost immediately although it has a very nice to
the touch smooth surface. 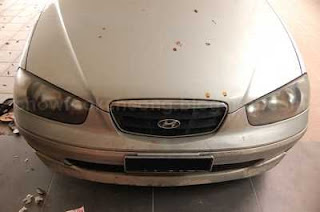 And well, the headlights are done, I think. Next is to
give it a nice wash. 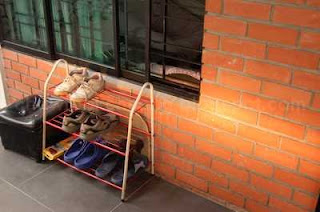 Whether PlastX made any difference to the performance, I
am not sure. This is the shot taken before the treatment.... 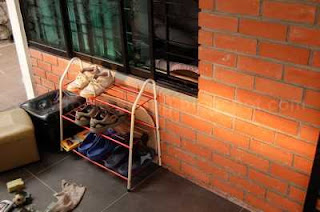 And this is the shot taken after the treatment, which is
about 30 minutes apart. Yeah, I don't see any difference
either.
Date: Sunday, November 02, 2008 No comments:

Email ThisBlogThis!Share to TwitterShare to FacebookShare to Pinterest
Labels: Elantra

So, I rushed out to see what has happened. The tree across our neighbour has toppled. It crashed into the newly constructed playground fencing. Luckily, no one was hurt or any car damaged although one of their cars were parked underneath. It escaped with a lot of debris. 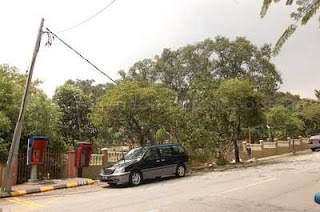 The tree collapsed and luckily, the fencing saved the car
(you can't see it because it was driven away seconds before
the photo was taken) 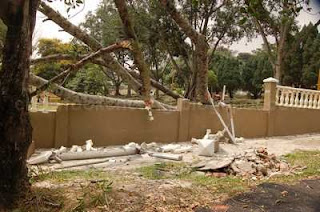 I hope the contractor ahs already been paid for his job. this
fencing was only less than a few months old. 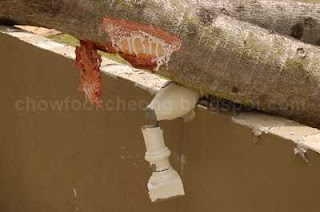 With the bark peeled off by the concrete, the tree was
bleeding with sap. 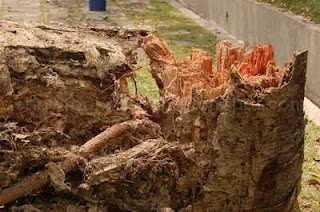 Was it termites or just stress to the tree? I have seen
the debris and it was very very dry. 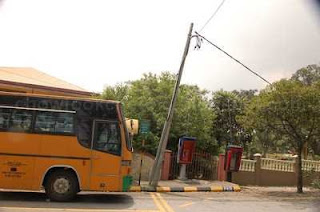 I just realigned the camera to show you how the fall
has affected the power pillars. Luckily, it (cable) did
not snap or else some parts would have power failure
Date: Sunday, November 02, 2008 No comments:

As of November 1st, I will be using the Hyundai Elantra instead of my trusty (and fun-to-drive) Proton Satria. First of all, I was not very receptive to the idea of driving this car as the previous (original) owner gave the general impression that it was a gas guzzler and also expensive to maintain. However, orders are orders. How the car came to be, is not of importance because if I were to explain, it would only add fuel to the fire.

I have test driven this car before, on my last trip to Ipoh. And from that day, I drove it most of the time. And so, my reluctance to handle this car sort of faded as I came to realise that its not such a bad car after all, even though its Korean. Most importantly, it has air-conditioning, something which is a must for me because my Boss already sensed that it must be ME who go into customer premises full of sweat, catching cold and go into serious MC. (Ha ha)

Anyway, once set the tire pressure, the car's fuel consumption changed drastically. For RM50, it was giving me anything from 150 to 180KM, similar to the van. But just as of yesterday, I upped the pressure from 32 to 38PSI, I noticed the fuel gauge running quite well. Still, I will get the result in a few day's time, no thanks to the 17" low profile tires. I suppose yesterday's service of oil change and filter did help a bit. The foreman also have his own opinion about Korean cars, especially the Elantra which has a very big and heavy body: good and stable but the engine's not powerful enough. Anyway, on to the car.... 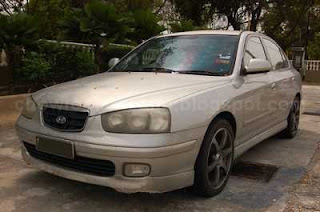 Trust me when I say the car has not been properly maintained
for months. It has been parked under the Sun too. 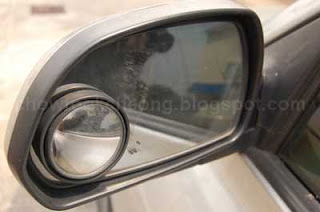 You can see the dark streaks of dried water after I tried to clean
the mirror as I have not started toclean the car yet. 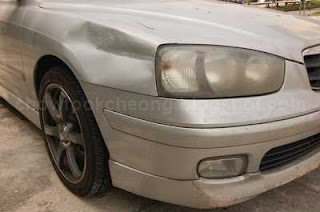 As you can see, the front part of the car looked as if it had
gone through a lot of high speed adventures. The lower
fron bumper lip (a fibre-glass add on) is badly scraped.
And then there is the heart-wrenching gash on the
side panel (near the lights) where an ex-staff had
problems with the brakes and hit a 4x4's bumper 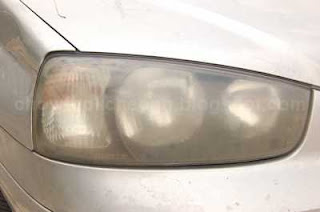 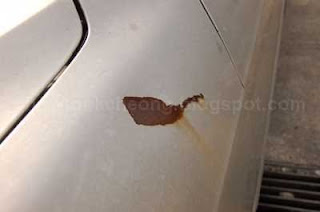 Most of the car's area have small spots of rusts and some of them
are like small pin pricks. But this one is the worst of all. 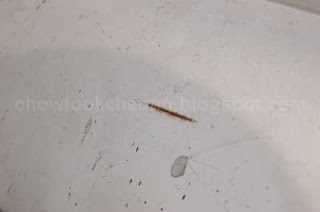 And this one is at the rear of the boot. Still, Boss promised me that
he will send the car for a new coat of paint and reconditon it too.
But until then, I hae to make sure no more rusts. 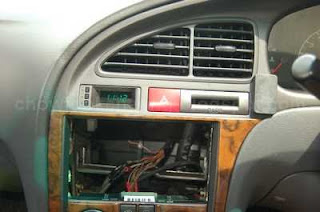 The internal cabin of the car boasts of modest creature comforts. There
is also the temperemental clock which shows you the time when you do
not drive the car over a hump. And the state of the art entertainment
system which has stealth capabilities. I cannot show you because we
still cannot locate and disable the "invisible mode" button. What I do
like about the dash here is the small slot for you to insert either a toll
or parking ticket. For bigger tickets, you jsut have to fold it in half
and hope they will still accept the ticket at the exit. 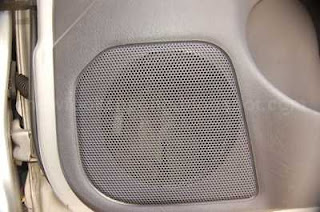 Here, the state of the art mylar (tranparent plastic) speakers can
be seen at the door. As it is connected to the audio system, it has
gone invisible too. 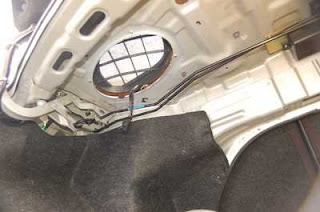 And at the boot, you can even see the 5-disc CD changer along with the
ultra powerful 6x9 speakers. Now, the only thing missing is the big
sub-woofer system. But in reality, the owner has taken all these away
during his "escape", "Can you let me have the car for a few days to
settle my things?" And this is the result. Although he promised to
brng back the original stereo, its more than a year and my Boss
does not know that the speakers are missing too. I will have to
tell him sooner or later. But this does tell a story of how
Honorable he is. 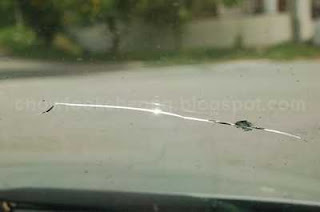 What he hit, I am not sure but this happened long ago.
To get it fixed, it would cost a bit and since its not
life-threatening or anything, I'll let it be for the moment

[Update: 04.11.2008]
My Boss knew about the missing head unit and the speakers. So, he is tasking me to do them up again. But I have to ask him for a budget. Most probably it would be a trip to the junkyard for the speakers, my techs would lay the cables and I would scout for a El cheapo DVD MP# player with USB and/or SD card interface. Muahahahahaah!
Date: Sunday, November 02, 2008 No comments: