My Fantasy Project - The PADD

First and foremost, after I got married and we got a little monster, (And I am not complaining) most of my projects got as far as the daydreaming stage. And thats it. So, this time, I wanted to make something that I can hold in my hands. Ok, before I got married, most projects went as far as 20% completion before being shelved to somewhere where the Sun didn't even bother to shine.
I wanted to make this for a long time now but never did have the time nor money, let along the technology. That is the problem with Malaysia. The solution you wanted is either there (and too expensive) or not there (reserved for industrial use or manufacturing). And it takes time to search for them too. Not everyone have a website nor advertise in the local papers or even in the Yellow Pages. Most of the time, I have to find the RIGHT person who knows where to get it.

What am I making? This is a PADD (Personal Access Display Device), something like a very advanced PDA as used throughout the Star Trek Universe.

Anyway, this is a very simple project (yeah, right) which involves making a few pieces of acrylic and glueing it, then print a nice sticker for the screen and buttons, get the right paints and you're done. 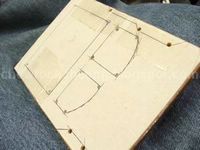 My dismal failure with drills, saws and sandpaper three years ago
Which ended with a lot of broken things

After a stupid setback a few years ago, I decided to try this again, but with a CAD software. All you need to do is to find a clear picture of the darn thing and then trace it on the screen or software equivalent. Its tough and can make you go bonkers but after hours of this, you don't even care if you're alive or not. Anyway, the rough dimensions of the PADD is about 100mm by 155mm with 11mm thick.But then again, I could be wrong.

All four plates sandwiched together

Add a bit of colours

Well, the render engine is not so sophisticated but its good enough
The big square button has been replace with a 5mm hole in the final design

The design actually calls for a static piece but I wanted to put something extra in the near future:

1. My original idea is for a lighted screen so I can design the screen myself. Actually, I wanted this to be a lighted photo frame.

2. Maybe add in some touch-switches and a sound module so when I touch the screen or buttons, the thing would make some sound. But the tools for doing this is not exactly cheap (R&D cost would set me back about RM1500)

3. A small microprocessor which allows the user to switch it on and produce random sounds when various buttons are touched. (R&D extimated to be RM1000)

4. A rechageable battery (where you charge it like a normal mobile phone and no fancy wancy induction stuff)


And how is the planning going? I have called up two suppliers who does laser cutting on the acrylics. And with the prices they quoted me, I could talk in expletives the whole day.......... And I haven't even started on the cost of making the screen yet. So, everything could be about RM3500 (which buys a LOT of baby Pampers and powdered Formula Milk)

I could be better off buying a ready-made ultra accurate kit which sells for USD20 instead and complete my project faster. Or, I could get the actual working one which is much more closer to my ideals for RM1000. Ha ha ha.

Let's see what this coming week's quotation brings. If its too much trouble, I think I am going to save my lunch money again instead :)


If you'd like to have an ultra accurate PADD kit, you can contact Matthew Munson at matthewmunson_@_yahoo.com (You need to remove the "_" from the E-Mail first as these spam bots are nasty). And, if you like to have THE ULTIMATE PADD that has lights and sound, you can give Gerhard Mros a call at gmros@cogeco.ca and you will not be disappointed.
Date: Sunday, December 04, 2005 4 comments: Links to this post