2nd Day CNY: Doing the pre-Visit to the In-Laws

Today is the second day of the New Year and so, we went to visit our Mother in Law. The plan was a simple one, visit Mother in Law, then bring her to another Sister in Law's house. But by the time we arrived, some relatives have arrived a day earlier. And so, with so many people about in the house, Kristine and Kaelynn started their runing and shouting act again. For me, I like the feeling because as I have said, I like to have a lot of people around me. Makes me feel comfortable and belong.

And so, we had a lot of things to do such as trying to get some Malaysian maps for a new Garmin nuvi250 unit without the USB cable, chase after the dogs back in who love to run out of the house, chase after the girls in case they break something and best of all, use SIL's Notebook to surf the Internet. Heh. And although everyone was there a day earlier, today's visit does not coutn and so, we're going to go back there again tomorrow, which is fine by me. By I was informed Loctor was coming down to Ikea tomorrow, I feel like escaping for an hour or two just to hang out with him and the mystery person who-cannot-be-named. Ha ha ha ha! 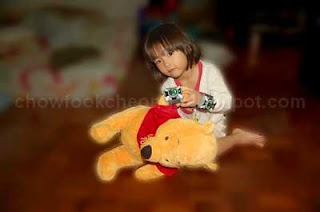 As Kaelynn was nowhere to be found, Krsitine decided to
get Winnie to be her Ben10 sidekick until it was time to
get ready to go out. 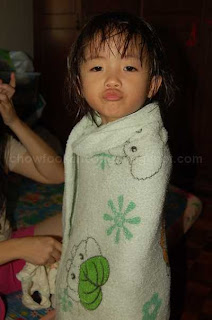 Caught this facial expression just in time.
Something about it being very naughty
and yet cute at the same time. However,
Mommy does not share the sentiments. 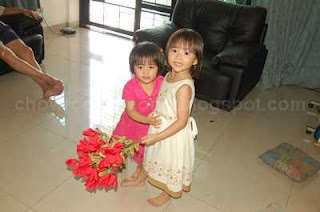 The girls in their new clothes 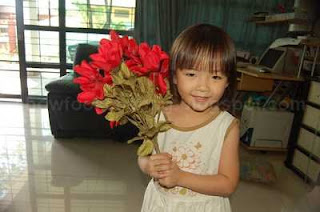 If you see a girl with this kind of sinister eyes and smile, you'd
better keep an eye on the flowers or you'll learn the hard way
how flowers can be pressed with the help of human cheeks 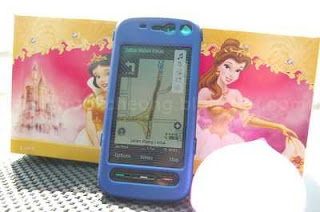 Used the Nokia 5800's GPS again. Well, with three more days
before expiry, why the heck not? Anyway, the navigation
around Mid-Valley to Old Klang Road was not too accurate
Then again the route was done last year. I am beginning to
doubt the accuracy of the Nokia Maps if have to pay for them. 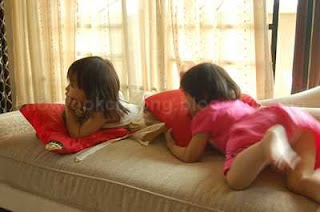 After they settled down, they decided to watch some Astro 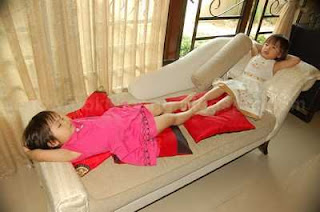 A few minutes later, the realised there is no Cartoon Network
and this is where they start to tear the house down 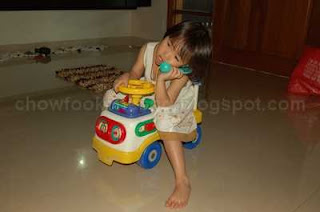 I just hope that when she is 21, she would already have a
handsfree kit in the car. And I also hope that by that time,
car technology would not regressed to Flintstones style
or it would be Hell on the legs. This is not a good example
of bio-fuel technology. 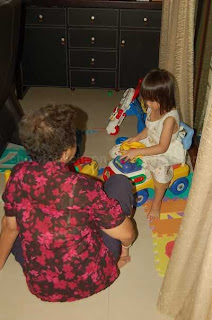 Fortunately, we have Grandma to show
her the errors of her ways. And so, she
got "Saman-ed" 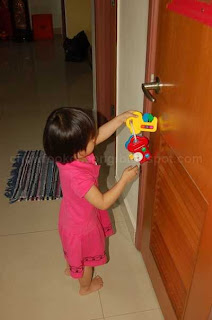 Meanwhile, Kaelynn was trying to open
doors with her new found keys. 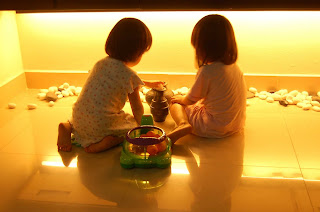 Later on, I caught the girls putting rocks into the vase.
For the rest of the evening, with Kaelynn asleep and
most of the family doing what comes naturally during
the New Year, I had to make sure Kristine does not
cause any more trouble.

Everyone was tired by the time we came back home. As soon as energetic Kristine touched the mattress, she went out like a light. In fact, everyone did the same except me because I have to download the photos and update this blog. OK, now I can go to sleep. G'night!
Date: Tuesday, January 27, 2009 No comments: