Here are some bits and pieces for what I am currently doing while I am not finalising the Phaser Rifle. I am trying to make use of the broken pepper mill for a Sci-Fi project and has done the electronics for it. Now, its just a matter of asking my friend to Dremel the holes for the switches. I wanted to get a micro switch as the power switch instead of the slide switch (Makes it look like toy) but there is a problem because the micro-switch might not fit into the cap. Still, I asked him to try.

In real life, the grenade might not be workable because if you flip open the orange cover, it is already on. And once you push the red button, the thing would be activated and you throw it. But if the enemy catches it and flips back the cover, then it is off. Yeah, that was his argument and it is true. But then, I have ran out of ideas..............

I can leave the thing on all the time and only press the button to activate it. But this would mean depleting the batteries. Another idea is to have it on all the time but use another push-button to have it on stand-by, with all the flashing lights. The only way to disarm it might have to push both buttons together. Nah, I think I'll go ahead with my idea first. Ha ah aha ha ha 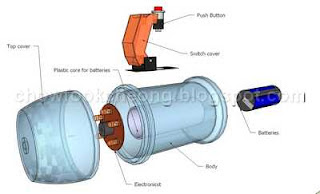 A 3D sketch of the prop (Version one) 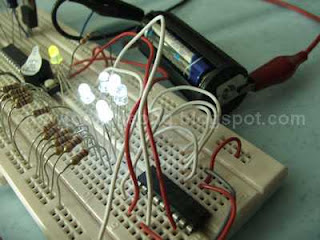 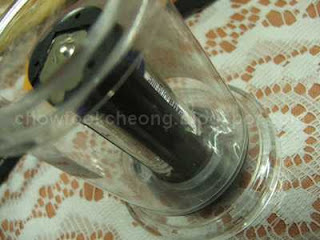 The battery holder and the batteries for the prop
Date: Sunday, June 03, 2007