With the Carrefour building about to be finished in another few months time, there has been a lot of traffic next to our office. With the new shoplots completed already the traffic is quite significant. And with that, a lot of stalls have opened up too. Even the local Pisang Goreng stall have opened up another "branch" nearby. Ha ha ha ha 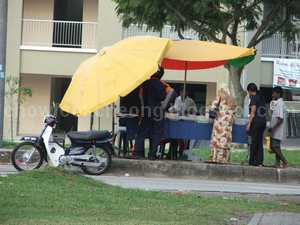 By day, the spot has been taken up by the nasi lemak
lady. Previously, it was manned by a pair of couples,
all four of them were very young. Sometimes they are
there, and sometimes, not. Eventually, they gave up
and this lady moved into their spot from her old place
just a few metres away. Anyhow, this created some
obstruction to the traffic, especially in the morning. 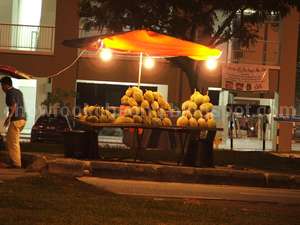 Then at night, the occasional Durian stall since this is
the Durian season.