Bitch on the Road

Hey, you piece of fuck!
Yeah, you on the fucking Wira. Everyone is already on the second lane, trying not the block the traffic and hare you come. You and your fucking blue Wira. I know you have a kid in there and so this means you have the Goddam right to be a selfish cunt and all.
Normally, I would not care much about this since this has nothing to do with me. But since its so close to the anointed time, the fucking bitch in stead of becoming a dutiful parent has now become a fucking road obstacle. Why? Very simple.
The car on my left lane wants to come out. Since there is a gap in front of my car, I just let them pass. But yep, you guessed it. The old bitch on her Wira pretended there was nothing worth bothering except to get her kid. So much so, if there is an out of control lorry coming heading for her from behind, she would not even notice it. And so, this is how it started:
A simple toot from the Waja.
Nothing.
Another friendly toot.
Nothing.
So, the old geezer came out and knocked on her window only to be showered with hot air. I mean, even a deaf person would have understood what had happened from all their body languages. Stupid cunt shaking her head and gesturing with her hand, saying "What the fuck is your problem? I have a kid in there, motherfucker!"
So, the old geezer went back to his car. Obviously being a loser because you can see his head starting to droop. OK, maybe there is a chance because he did open the cunt's Wira door and shouted at her, before leaving the scene. Good thing he did not close the door because the bitch has to do it.
After a few seconds defending himself from the wife, who is the rightful Boss, came out again. You know she is the Boss because she was the DRIVER. This is the stage where she has turned into the End of Level challenge thing. But alas, stupid cunt stuck to her guns. This is one of those fucking annoying things bitch on the road do. They always move forward. Whatever it is, they move forward. The 'R' on the fucking stick is for reverse, not rape you stupid cunt.
And with the clock ticking and the fucking car now horning behind me, I really lost it. I mean, come on, the gate is opened and now, both of them are blocking the road. Luckily, the car on my right had the sense to move out. And also, the car behind decided not to move to close the gap because everyone has sensed what is going to happen.
Yep, me. Its show time.
I got out. Shouted some choice expletives and told her to reverse the car so that the Waja can move out. But all this stupid bitch with shit for brains decided to move forward 2 feet. Man, this is so stupid. So, I banged hard on her boot to get the message across. This is also the time where the End of Level session is about to finish, Boss or not Boss. And still, she moved forward. So, I fisted her bonnet again with one big thump. And still, she moved forward.
By now, thanks to her stupidity or fear of me, there is enough gap for the Waja to come out. And so, I got into my car and joined the queue. Funny thing was, I noticed the cars at the back of me were all feet apart. Oh, come on, I am just resolving the problem for the rest of you. Fucking idiots don't even have the balls to come out.
And no, its not over. Now, I am side to side with the bitch and she still wants to cut into my lane. And so, I pushed forward and edged her out. Seeing this, the other cars again, kept their distance.
I tell you, ha. When it comes to this, no one would have the balls to help each other. What a fucking load of balless shit.
One good thing? I got my temper back. It was never gone at all. I know this because right after the explosion, my head hurts and so were my lungs. OK, so does my throat but it feels so good to shout at that bitch. Too bad my hands are not satisfied though. You can say all you want as I am all for gender equality. This means, I have no qualm hitting a woman if it is really necessary, OK? You want to be treated equal, then accept the whole fucking package. 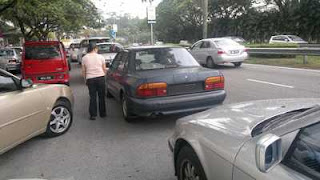 Email ThisBlogThis!Share to TwitterShare to FacebookShare to Pinterest
Labels: Rant