If you have a nice pencil and a cream notepad with subtle lines, you will definitely enjoy drawing out your ideas. And for me, a nice Keyboard makes typing, um, enjoyable. I have changed a lot of keyboards for the last 20-odd years. From the ones that came with the PC to the clear blue (everyone went nuts with clear colours when the clear Apple iMac first came out) to well, DELL's and so on).

Despite the variations, I could not compare the one back when I was in Uni. At that time, the PC were either XTs or 386s but there was one item which captivated me. The Cherry mechanical keyboards. Boy, it was so fun to type on, as if I was using some kind of fancy typewriter. I also feel like one of those hackers or computer experts like the ones you see in the movies because of the clacking sound. Anyway, it was high time I got myself a new keyboard as the current one felt very big and it was so.... so, PS/2.

The so-called gaming accessories became big a few years ago and everyone was talking about red or blue switches and so on. I did try a few at the shops and their asking price really want to make me turn to a life of crime. It was not until two nights ago that when I was about to doze off, an Ad on Facebook came and price was too good to resist!

Long story short, I got the Keyboard sans keypad for half the asking price, which is quite a bargain since it was from Armageddon. Yep, the MKA-2C  Psychraven from Singapore. The only problem I had was:

1. No USB connections (kinda miss my Dell)
2. No keypad so my pinky keeps molesting the mouse
3. I'm always hitting the CAPS LOCK
4. Very small ENTER which means I end up hitting the '\", and
5. The slant angle of the keyboard could be higher, please.

After an hour into typing, the muscle memory is starting to get used to the new setup and as long as I don't think about which keys to hit, the mistake are at a minimum. But somehow, the light effects on the keyboard is kinda distracting. I am sure there are a lot of settings but it did not come with the manual. I guess I'll look up the 'Net later. Right now, I'm just click-clacking around. 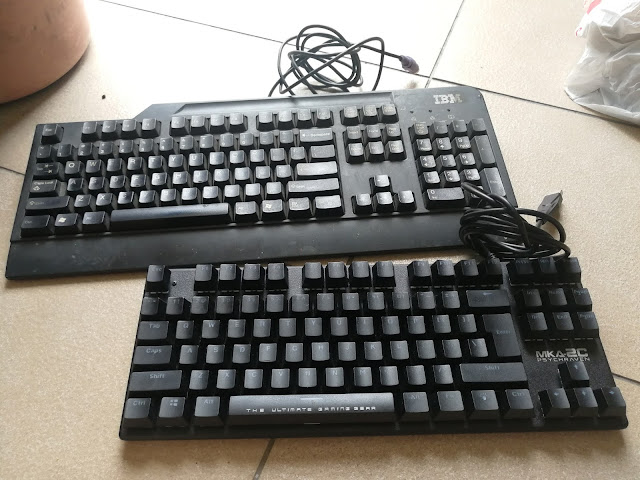 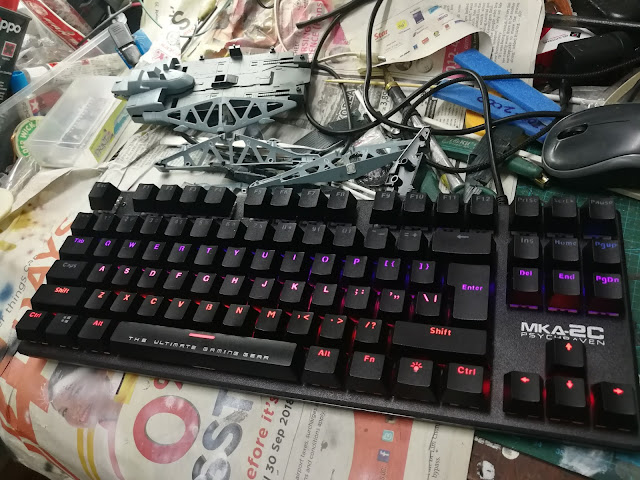 The keyboard's lights are sometimes quite distracting. Maybe one day, they would have a white LED for the keycaps while the rest can round around for all I care. 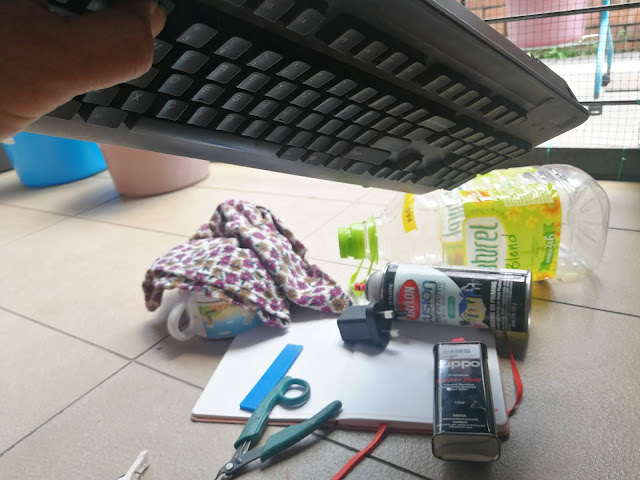 Cleaning the IBM keyboard. Yeah, there's a lot of stuff stuck in there.

Email ThisBlogThis!Share to TwitterShare to FacebookShare to Pinterest
Labels: Computers