Because its a Sunday night, we thought there were not much people at the airport. Boy were we wrong! By the time we got our stuff and came out of the doors, there were a lot of passengers queuing up for the Airport Taxis and Limos.

Initially, my idea was to use the KLIA Express which would cost RM70 for two. But taking the taxi for RM58.50 is much cheaper and since my colleague can fetch me back from PJ, who am I to argue?

The queue took us about 25 minutes. There were a lot of frustrated passengers returning their tickets and chose the ("illegal") touts instead. Anyway, when it came to our turn, there was a black taxi and a white proton Wira. Luckily for us (heh heh) the Japanese passenger got into the Wira and we got into the bigger taxi. For RM58.50, this is a very good deal. I think it was because of the long queue, they brought these taxis in instead of the normal Proton Wiras. And if we did get the Wira, well, its like paying RM100 for a half-eaten MacDonalds Big Mac. 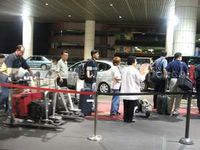 This is what we saw when we came out 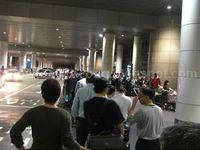 And horrors, after 15 minutes, we were still here! 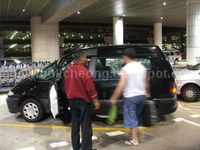 We were lucky to have this Taxi 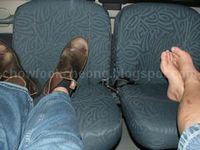 Finally, this is something we need to do more often 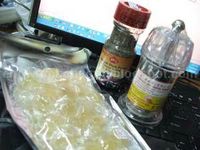 So, I bought some peppers and some Bird's nest Jelly sweet which I have never tried before

ih...how come never tell me u come over to kuching one???

He he he he.
Work comes first, Happy Hours, later.

But I'll contact you as I could be coming over to Sibu end month.....