We were just about to finish our last minute shopping at Mid-Valley when my Wife was feeling a little bit hungry. The kind of "I want to eat something but not too filling" hungry. Since it was slightly after 10PM, the only place that was not shutting down was MacDonalds. So, I decided to get her some ice-cream.

At the queue, I noticed that the Clown has come up with some new Ice Cream menu. The rannge was called Flavour Burst or something and there are five flavours; Something Mocha, Raspberry, Pecan Butter, Apple something and Oranger Burst. So, I bought Pecan (myself), Apple (Wife) and Orange Burst (Mom). These are the normal RM1.00 Ice creams but with those flavours added to it. Give them some fancy wancy names and now, the Clown has the right to add another RM0.90 to your ice cream.

So, after handing out the ice-creams, my Mom made the mistake of giving a bit to the already sleepy Kristine. All it took was just one bite and everything went downhill. Before you can say "The running brown dog jumped over the grey fox with a pole", both of Kristine's hands were grabbing the ice cream tightly as if it was the only food left on Earth. 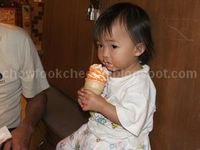 After she snatched the Ice Cream 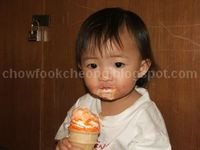 It was all eat, eat, eat 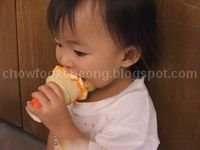 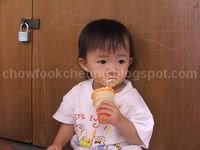 And throughout the rest of the (Mid)night, we can't sleep as Kristine is now very Wide Awake. Anyway, its now a proven fact they you should never give sugar to a baby, especially when you want to go to bed.
Date: Monday, April 24, 2006