Today is Wesak Day. Today is also, by coincidence, where it happened to be a Holiday. Whether it is Public or not, is up to the individual. But nevertheless, it is a Holiday. Which also means my driving to work would be blissful since there would not be so many cars on the road.

But I did not drive to work today.

Why? Because today is Wesak Day.

So, we went to the Maha Vihara Temple in the early morning or rather, in the earliest time I could wake up before getting a Kung-Fu kick from the Wife or, being woken up by the girls, whichever is worse. 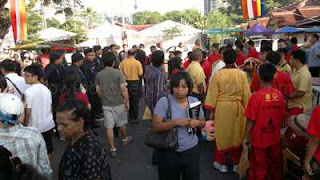 Funnily enough, there were a lot of police personnel
stationed there. By in light of the recent events such
more Perkasa announcements and the covert death
of someone in Pakistan, I'm not suprised. 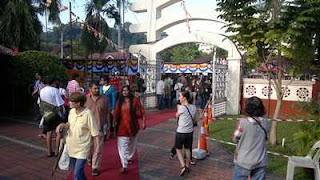 But there is am immediate effect to that because
there were no signs of beggars at the gates, and
so, I could not donate some things to them. 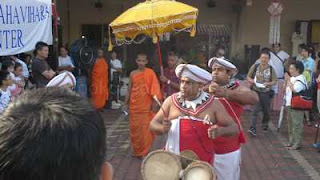 Halfway through, there was a procession where, the
Priest walked to the stage to deliver his speech 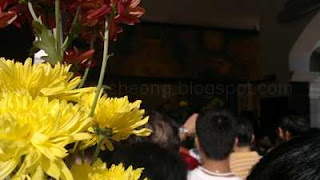 After his speech, we continued with our program 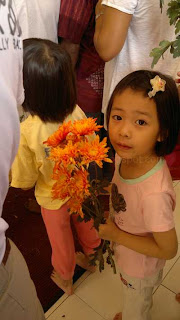 And this time, the atmosphere is
very nice and cooling even though
it is almost late morning. 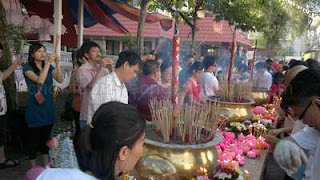 And surprisingly, the crowd, although
large, was actually bearable. But this
time, there were more photographers
than normal. I wonder why... 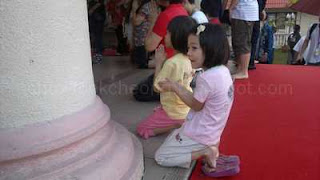 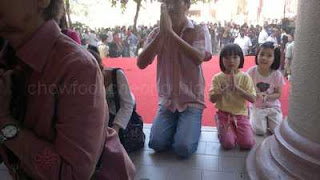 They were so cute, some photographer kept
taking photos of them. 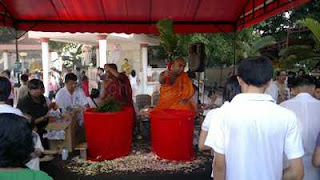 This is where we start to collect the Holy Water
and also, being blessed again. 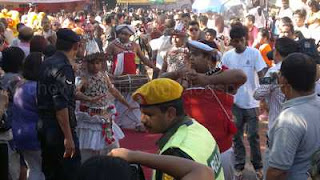 Then, all of a sudden, there was a commotion and
well, you start to get the feeling that something
official is coming in. They even have a Lion Dance
which is very weird for this time of the year. 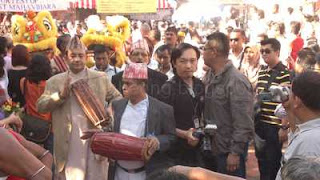 Yep. And all sorts of 'freak attractions' start their way
in and onto the main stage. 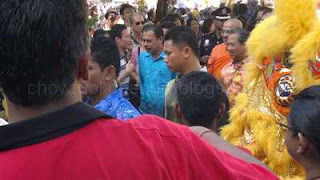 With all the hoo-haa, everyone wondered what the
commotion was all about. But it turned out to be just
nothing. I mean, you have Police presence, some
body guard looking chums and friends but there
was no one important for all I can see. Oh well,
back to the program. 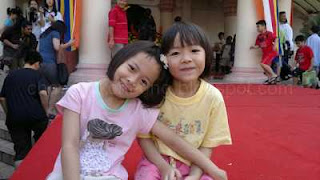 And then girls came back to the stage for one nice
little photo. 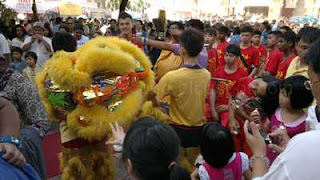 On our way out, even the Lion dance people are
packing up as if nothing important really happened.
Everyone was wondering, "what was that all about?" 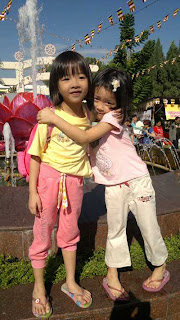 As the Sun was really coming out,
we tried to take as much photos as
possible near the fountain. But the
lighting was very harsh. 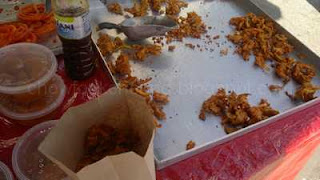 Temptation came and I followed, so I bought
one of these (I forgot the name). Its actually
some vegetable deep-friend it batter and its
hot. Spicily hot. Immediately, my favourite. 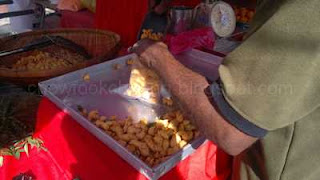 Then on to another store and i got more of these
as it has been years since I had some. And yes, I
also forgot the name of this...delicious delicacy. 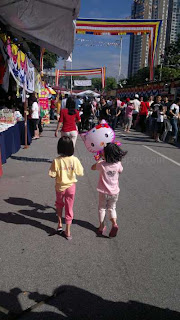 Then I also relented and bought
Kaelynn a balloon. Just one as I
told Kristine that she is getting
to be a big girl... the look on her
face was priceless but I saved a
few ringgit. Ha ha ha ha. 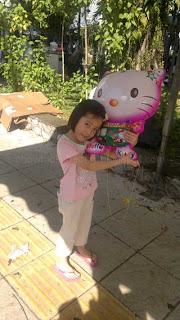 We stopped by a shady spot for the
girls to drink some water as the Sun
by now, is very very hot. Kaelynn is
showing her affection to her new toy. 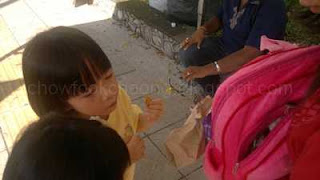 And the girls tried my two packets of deep-fried
stuff. Initially, they loved it but when it got too
hot, both of them were rushing for more water. 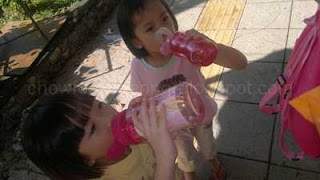 Which is funny because I did not tell them that
it was hot. They loved it until the realised it was
hot. But if I told them it was hot in the first place,
they would not even tough it. Get the meaning? 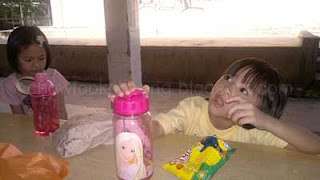 Another 200 metres and we stopped where the girls
finished my two packets of that deep-fried stuff, plus
more Monster Mee too... 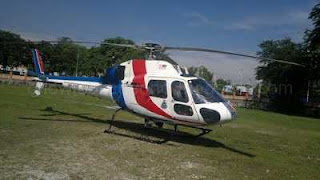 First time I have seen a Police helicopter up close.
After the prayers, I realised that I am still very 'early'. And since I took the whole day off, I decided to go back to the office and work for the rest of the day. The funny thing was, when I reached the office, it was almost lunch-time. What I did not realise was, that everyone took the day off AFTER lunchtime. In the end, only myself and a Manager was in the office... 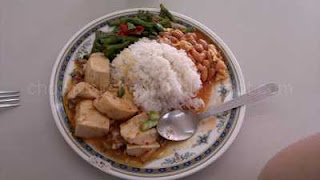 And for lunch, I decided to eat out. Tofu, baked beans
and some nice spicy spinach. Yum-yum. Hey, at least
with the beans, if I want to fart the whole day, no one
is going to notice it anyway. 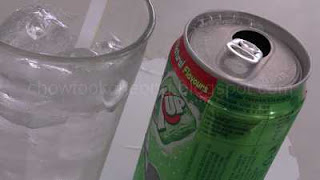 Yep, accidentally ordered a Permanis. You can see
the opening tab that looked like an angry face, reflecting
my stupidity.
Date: Tuesday, May 17, 2011