The problem with Monopolies

So, maybe I was not thinking straight or maybe, I have encountered some form of stupidity which took me a long time to brain this and overcome the situation.

But, no. You see, first you need to buy the card and then top it up with money. You have to follow THEIR Rules.

First problem:
The Tough n Go booth does not sell the Cards.

Second problem:
There are two TnG machines located quite some distance away. You can use the short cut ie a straight line though the Parking Basement which is a little hot.

Third Problem:
There is a long queue and the machine does not give back change.
Fine. So I decided to walk about 100m away to their actual Booth. Oh, guess what? They do not sell the cards.

Fourth Problem:
How to cleanly break a RM50?
Yeah, I had to dig around for a RM10 somewhere in the car to break the cycle, then queue up at the booth to get the card.

Fifth Problem:
They only can top up RM10, RM20 and RM50
Because of the queue, I went back to the booth but he would not accept the RM30 request. So I opted for the RM20 denomination and then he charged me RM0.50 for that.

Sixth Problem:
20 minutes later, a friend wanted a card too. I queued up at the machine again, bought the card. Re-entered the machine again and topped up from there.
It did not charge me RM0.50 for that. 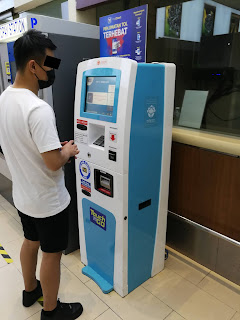 Although I do not know their background story nor do I want to, this does give me an impression that the whole process is very inefficient. Because they're the only boys in town for the last two decades, you can witness first-hand how monopolies creates more problems instead of solutions.