While I was at a customer's place, my mind could not help but keep thinking about the children toys shop nearby. But because they're situated in a hazardous place, better for me to get the car parked as near as possible to the shop. And so, with luck, I completed the service call with minutes to spare and I literally rushed out of the customer's place and started my car.

And I did something which I have never done before: Double-parked in a corner and in front of a busy intersection. After braving foreign coolies and transvestites, I managed to get my hands on the latest treasure! Wa hoo! Behold! 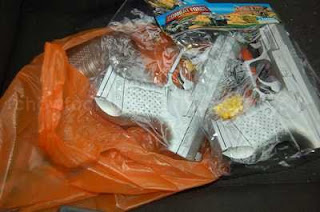 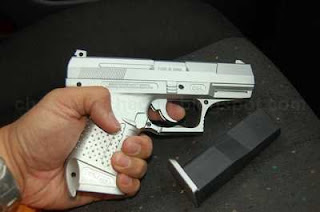 See? Real size! And nowhere else in KL that I know
of, sells them. Because all of a sudden, all shops that
did carry toy guns, regardless of size, dried up. 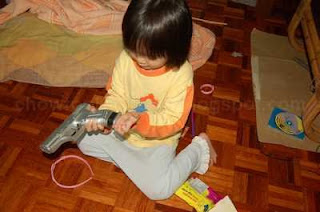 Kaelynn demonstrating how to load the gun.
I did not teach her anything but just handed
it to her and within minutes of looking it over,
she knows how to eject the ammo clip. Since I
did not put any BB bullets in it, I doubt she'll
know the significance of her actions. 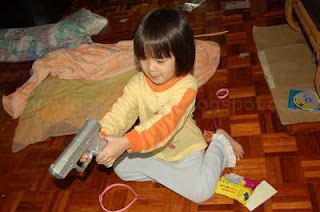 Later on, the kids lost the magazine clip. Sigh

Hey cool!!! Where did you get those P-99s? Pick a couple up for me when you see them please...