A Pelican for nexus

Finally, I got the chance to suss out the new toolsbag at one of the shops in Pasar Road. It looks very outstanding and well, rugged, as usual. Its as if its waiting for punishment and then, more. However, there was a request to see if my Storm case is the same as this Pelican. And so, one fine day, I got the opportunity to compare them side by side... 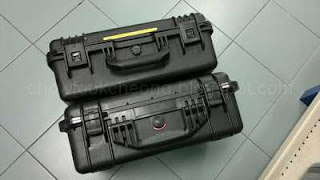 Mine is the one above, which has a yellow sticker.
The bag in question is below and the handle design
looks very nice. However, the clasps looks like its
complicated unlike mine which just opens with a
pull. This one needs to be yanked. 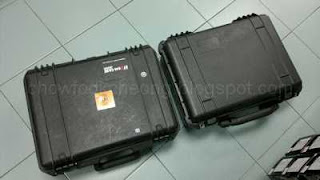 Maybe its the camera angle but mine looks very
much bigger than it should be. Maybe its beefing
itself up, jealous of the new bag. 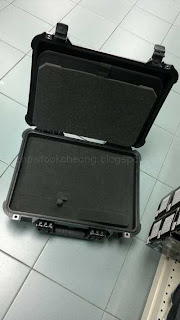 What is really nice is that it comes with
the foam block which someone wanted
it long ago. But for the other side of the
cover, its just a flap for putting documents. 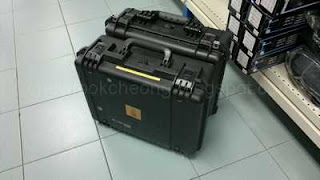 So, they looked almost the same and by measuring my
bag, the outside dimensions are 15" x 19.5" x 7.5" (thickness).
The inside measurements are 13" x 18" x 4.5"
(the last measurement of 4.5" is from the bottom of the
inner cavity until to the opening. Did not measure the
inner top cover, though

After asking politely, the guy said its RM400.00, which, I think is a good price considering how much I bought mine. However, because it has a missing label and the quality looked a bit rough, I have doubts in my mind. Oddly enough, there is another bag being sold across the road but its gone now.
Date: Thursday, March 24, 2011